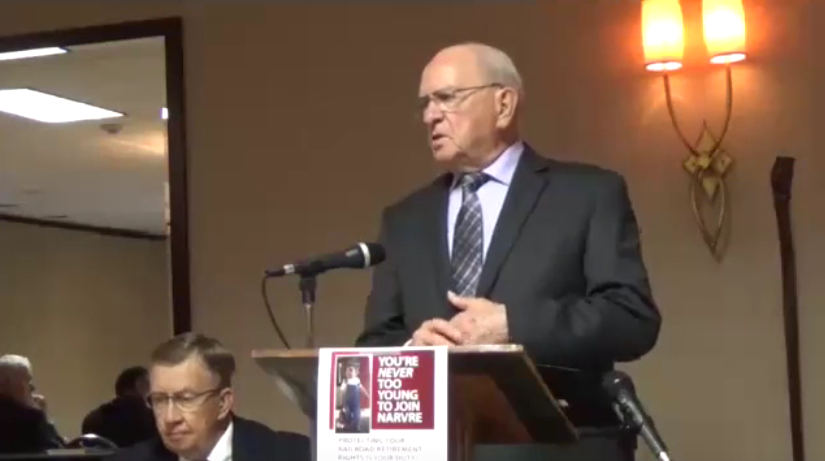 “I was raised in a railroad family in Sheridan Wyoming.   My Uncle Roy Bosley was a bridge and rail maintenence forman, my Uncle Frank Bosley worked in the yards at Sheridan.  My father, Harold, came down with MS (Multiple Sclerosis) and retired from the railroad after 17 years service.  He was a Brakeman and a Conductor on the CB&Q. . He sold insurance for the BRT for several years.  He was a super volunteer and fund raiser for the MS society. He stayed in Sheridan and was helped greatly to be independent as the MS took over by my brother John.   He represented the UTUIA as Volunteer of the year for the local Union, then won the national volunteer for the UTUIA, then represented the UTUIA at the national Fraternal Congress, and won there as National Volunteer of the year.  I took him to Nashville and he received a national award.  He was pretty proud of that.  His favorite saying when people asked him about having MS was: “It is mind over matter.  If you don’t mind, it don’t matter.”  He lived to be 83 which wasn’t to bad for a person the doctors said would be dead by age 55. “

“These photos are old and represent the old days, before diesel.  I have always liked them as a railroaders kid.”

“I saw many railroaders get hurt on the railroad and many who were health, once retired, have a long-term care experience.  It took all their assets they worked for all those years and left nothing for the spouse.  I went to the UTUIA National Convention in 2002 and received the endorsement as Council for Long-Term Care for NARVRE.  We work with railroaders to protect assets because the health care system works against people if they have assets and need long-term care. “